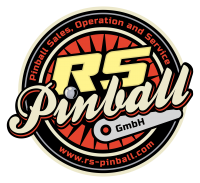 It is based on Alfred Matthew “Weird Al” Yankovic who is an American singer, musician, record producer, and actor which is well known for humorous songs that make light of pop culture and often parody specific songs by contemporary musical acts.

He also performs original songs that are style pastiches of the work of other acts, as well as polka medleys of several popular songs, most of which feature his trademark accordion.

The pinball machine includes 17 Songs from Weird Al as well as over 2.000 voice callouts

The Design team consists of:

None of these items will be purchasable separately.

The Museum of Natural Hilarity is a fantastical museum with exhibits and items that connect players to the Weird Al’s songs and his hilarious and descriptive song lyrics.  Al acts as the museum curator, welcoming players and guiding them through the museum.

All balls begin in the museum lobby with Al’s instrumental song Fun Zone playing.  There players can visit each of the 5 exhibit halls (listed below) and then go to the ticket counter (scoop behind the drop target) to select between the two available song modes for that exhibit.  Alternatively, the player can shoot the V, I, and P targets to raise the two center scoops that represent a VIP ticket counter.  From there, the player can choose any of the 10 exhibit hall song modes.

Upon selecting a song mode, theatre-style currents close on the screen.  When they reopen, the scene has changed to an immersive environment specific to the chosen song.  Each song mode has a unique set of rules that connects physical shots on the playfield with the lyrics of the song.  After completing a certain number of shots, the ticket counter shot becomes available to exit back to the lobby, or the player can continue progressing in the mode until the full song plays.

When back in the lobby, the player can activate the right lift ramp and spiral lift ramp for access to the mezzanine (upper playfield) by rolling over the „meal ticket“ inlane icon.  The main feature of the mezzanine is the „food court“, where the player can shoot the „Just“ „Eat It“ targets to collect food items to light My Bologna and the mezzanine loop to collect spatulas to enable a one-time use outlane ball save rollover target.

My Bologna is a mode that has the player building bologna sandwiches via mezzanine loops and targets.

There are 3 stackable Multiball song modes that work as follows:

– Hardware Store: Hitting the side targets represents items being broken in the museum.  After breaking 27 items, the rear hole through the pop bumpers lights for Hardware Store Multiball, during which the player collects tools and helps repair the halls.

– Dare To Be Stupid Multiball: Hitting the Harvey standup target causes Harvey to periodically poke his head up (represented by one of the P3 platform’s scoops opening) while the song Harvey the Wonder Hamster plays.  Shooting the scoop lights the hamster wheel for a Harvey Lock.  Shooting the hamster wheel via the right ramp or spiral ramp locks a ball for DTBS Multiball.  DTBS Multiball is essentially a game within a game, where the player can shoot the mini loop shots to spin the wheel, and item selected will do one of several things, including change the jackpot shots, change how the flippers work, award a gift, etc.

One other song mode, You Make Me, is a mini-wizard mode that becomes available after playing at least one song mode in each exhibit hall.

That’s the basics, and then other features help you progress, award gifts, or provide scoring advantages.  Examples include Squeezebox combos for scoring bonuses, Hawaiian shirt collection that leads to awards and scoring multipliers, and the supplies closet that of course includes a lost ’n found that occasionally acts as a mystery award.

After playing all song modes, Running With Scissors lights for a final trip back through the museum where the player relives all of the hilarity within.

This machine includes the optional Speaker Light Kit for 250€